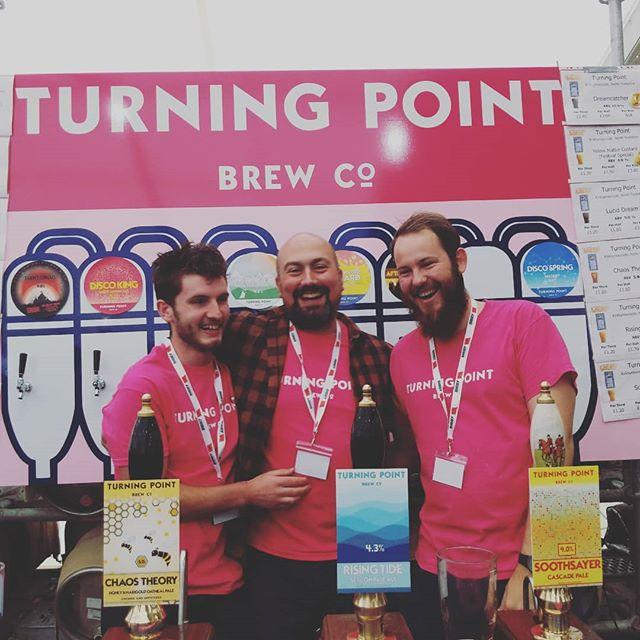 Turning Point Brew Co is a micro-brewery in Kirkbymoorside, which is just north of York, and on the border of the North York Moors. We are two guys doing what we love: Making modern, interesting beers that we love to drink. Our 12BBL brewery continuously produces beer in a diverse range of styles, using only the best ingredients we can get. We’re constantly on the lookout for unique ingredient combinations and how to get them into an enjoyable and satisfying beer. We utilise a fresh water well directly underneath the brewery, which is supplied to us from the rolling hills of the Moors.

Turning Point was founded in January 2017 by Cameron Brown and Aron McMahon. Cameron found his interest in beer at the Maltings (York); a love affair which kept him this side of the Pennines to later start up a new pub, The Falcon Tap which he managed for two years. Aron dove headfirst into the beer world, working with Brass Castle Brewery (Malton) and later, Half Moon Brewery (Ellerton). A recent addition to the brewing team is Luke Edwards, a former Bailey Head regular who previously brewed at Monty’s.

A love of beer led us to cross paths with work, and of course the odd pint or two.  What brought us together was a mutual enthusiasm and ambition to create a brewery that allows us to make the beer we want to drink, and have a great time doing so.

Since our debut in April 2017, we have been busy making and distributing our beers. We equally enjoy going up and down the country, taking our beer to new places, meeting people and sharing our story.

The list of beers for the Meet the Brewer:

Cask
Soothsayer 4.0% A refreshing pale showing off the classic Cascade hop, backed up by Summit hops for a modern, fruity finish. A balanced bitterness and slight sweetness from the use of cara malt make this a great quencher!
Suitable for vegetarians and vegans
Space Monkey Mafia 4.2% Inspired by fictional Italian-American primates in the 1950’s based on a misinterpreted Billy Joel lyric. It’s a session IPA. Using the hop Idaho-7. You need it. Suitable for vegetarians and vegans.
Sleeping Giant 4.2% A luscious, smooth porter, with hints of spice… nutmeg, cinnamon, coffee, and chocolate make this one a perfect wintery “by the fire” pint.
Disco King 5.1% Big on American hop flavour and aroma from Mosaic and Chinook hops. Drinkability for its ABV from a clean malt base. A real juicy one! Suitable for vegetarians and vegans

Keykeg
Lucid Dream 5.0% Cookie Cream Stout- Eight malt varieties give a complex backbone to this “dessert in a glass” beer. Cacao nibs, biscuit and oats bring cookie to the party with the cream coming from lactose in the boil and a touch of vanilla. Suitable for vegetarians
Swerve Driver 6.0% A monstrously dry-hopped IPA. As pale as the moon, with layers of tropical fruit, lemon zest and pine from a triple dry hop charge of Centennial, Amarillo, and Mosaic.
Hoodoo Trance 8.5% Our first DIPA, and the first time we’ve used Cryo Hops. It was only a matter of time! Chinook, Ekuanot, Mosaic and Simcoe. Expect serious levels of juiciness.